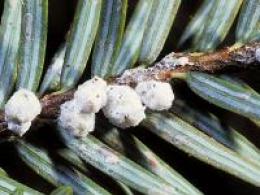 COLUMBUS, May 7, 2012—The Ohio Department of Agriculture (ODA) and the Ohio Department of Natural Resources (ODNR) today announced the discovery of a hemlock‐killing pest in Washington County in southeast Ohio. Hemlock Woolly Adelgid (HWA) is a small, aphid‐like insect native to Asia that threatens the health and sustainability of eastern hemlock and Carolina hemlock in the eastern United States.
The infestation was confirmed in Washington County after citizens reported suspicious hemlocks to state officials from ODA and ODNR. At this time, 404 hemlocks out of approximately 1,025 hemlocks surveyed were found infested. Further surveys will be conducted in the surrounding areas to determine the scope of the infestation. HWA is primarily transmitted by wind and birds. Officials believe the finding in Ohio is the result of natural spread from nearby areas where the pest is established.
This is the second time HWA has been detected in a naturally occurring stand of hemlock in Ohio. In January an infestation was found in eight hemlocks in Shade River State Forest in Meigs County.
At this time, ODA will move to expand its hemlock quarantine to include Washington and Meigs counties. Ohio’s updated quarantine, enforced by the ODA’s Plant Health Division, would add the two infested Ohio counties and 30 counties in the other infested states.
Ohio regulations that cover the transportation of hemlock materials restrict any hemlock plant material from counties known to be infested from entering non‐infested counties in Ohio. Hemlock materials grown in non-infested counties in quarantined states must be inspected and shipped with a phytosanitary certificate, which verifies that the material is free of HWA, before it can enter Ohio.  For more information about the HWA and Ohio’s quarantine, visit www.agri.ohio.gov.